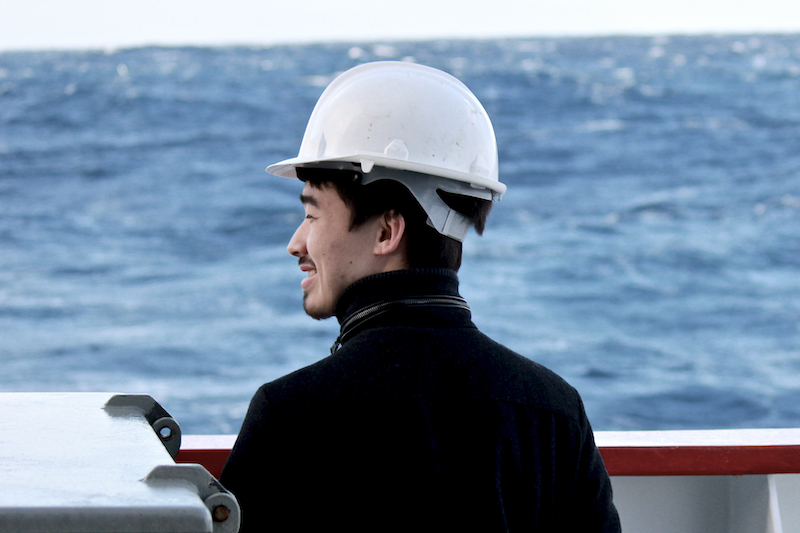 The ice-covered Southern Ocean around Antarctica is a dynamic region that plays a key role in global climate. It is characterized by substantial spatial and temporal variability in heat, salt, and biogeochemical fluxes.

My research focuses on air-ice-ocean interactions, offshore polynyas, and the transformation and ventilation of deep waters within this region. The past decade has seen an increase in under-ice hydrographic measurements from Argo floats and instrumented seals, and my research takes advantage of these new observational capabilities as well as remote sensing and atmospheric reanalysis.

Offshore polynyas in the Weddell Sea

The periodic appearance of large sea ice openings, known as polynyas, offshore of the Antarctic coast has been an enduring mystery in polar oceanography. In Campbell et al. (2019) in Nature (see also Swart et al. 2018 in BAMS), we explain why polynyas form near the Maud Rise seamount in the Weddell Sea in some years but not others. Two SOCCOM Project biogeochemical profiling floats were present during the unexpected 2016 and 2017 polynya events and collected measurements that suggest reduced haline stratification preconditioned the appearance of the polynyas. These in situ observations also indicate that the polynyas were sustained by deep convection, which had long been suspected for polynyas of this size but had not been previously observed. Using the float observations and a variety of other data sources, we show that storms were the proximal trigger of the recent openings. Both increased storminess and reduced upper-ocean stability in the eastern Weddell Sea region are favored by positive fluctuations in the Southern Annular Mode (SAM), which we identify as a common factor in the 2016-2017 events as well as past polynyas near Maud Rise. The long-term increasing trend in SAM raises questions of whether this effect will win out over the simultaneous trend toward a more stratified Southern Ocean, which would tend to limit polynya occurrences.

Phytoplankton blooms in the Antarctic seasonal ice zone are limited by light and iron. Offshore polynyas may impact biological productivity by alleviating light limitation or increasing subsurface iron fluxes. In von Berg et al. (2020) in Geophysical Research Letters, we explore these relationships using biogeochemical profiling float observations and model data. We find that spring blooms in the Weddell Sea tend to immediately follow ice retreat, and that the Maud Rise offshore polynya in 2017 likely enhanced carbon export by allowing an early bloom initiation. While it appears that biological impacts attributable to deep mixing during the recent Maud Rise polynyas of 2016 and 2017 were minimal, it is likely that offshore polynyas can modify carbon fluxes through early bloom initiation or air-sea gas exchange during deep convection.

The Antarctic seasonal ice zone features strong regional variability in ice–ocean feedbacks, which affect the growth of sea ice and release of heat during winter. In Wilson et al. (2019) in JPO, we characterize these ice–ocean feedbacks using observations from Argo floats and instrumented seals. We find that the Weddell Sea is more susceptible to destabilization and polynya formation than other sectors of the Southern Ocean. Using idealized 1-D model simulations, we show that, to a large extent, ice–ocean feedbacks also determine the sensitivity of the upper ocean–sea ice system to strong wind-mixing events.

The following are several projects that I have been actively working on (or just thinking about!). Of course, not all of these will be completed in the next few years of my PhD. Contact me if any of these sound interesting or if you are engaged in similar research. I would be excited to collaborate!